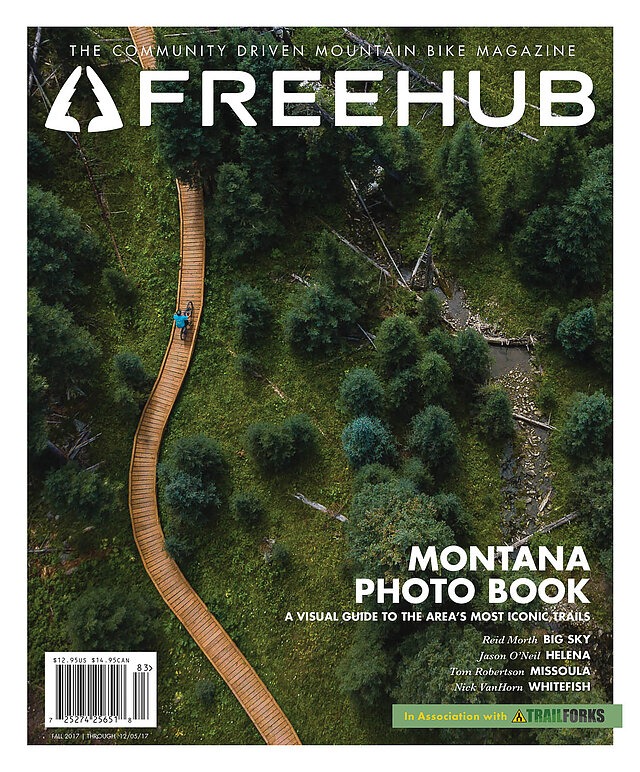 Freehub Magazine Issue 8.3, the Montana Photo Book, is a visual guide to the trails of the Treasure State. We selected four local photographers, Reid Morth, Jason O'Neil, Tom Robertson and Nick VanHorn, to document their respective hometowns of Big Sky, Helena, Missoula and Whitefish and capture the experience and vibe that fill the mountains of the Montana high country.

Tucked in the western flank of the Henrys Lake Mountain Range, near the border of Montana and Idaho, the Mile Creek Trail threads enticingly up a narrow, densely timbered drainage.

In 8.5 miles, the beautiful ribbon of soil and stone ascends 3,300 feet, zigzagging through 53 well-crafted switchbacks toward the alpine terrain above. Known locally as “the Lionhead” for the range’s feline-esque profile, the Henrys are big country. Grizzly bears and fickle mountain weather are constant worries, and travel requires top-notch backcountry skills.

Climbing to nearly 10,000 feet, the views from the top of Mile Creek are incredible. West Yellowstone is 25 miles to the east, and the Gallatin, Teton and Centennial ranges fill the horizon. From the ridge, trails take off in every direction, all with sustained climbs and technical descents through spectacular and remote backcountry.

Yet on this July weekend, riders will most likely pass bikers and horse-packers loaded with tools, stopping to clear brush, cut fallen trees and dig the occasional drainage dip. These 49 individuals, who have journeyed from different parts of Montana, Idaho and Wyoming, are here to make a high-profile, heavy-sweat-equity statement. Their efforts are centered on a nearly 20-year-old conflict, a bittersweet story that delves into what types of recreation are appropriate on our public lands, and the value of bicyclists as conservation partners in defending these wild places...

Not far from the bumping burb of Bozeman, MT, a peaceful ribbon of dirt winds through the woods.

Intimate—like a rarely traveled game trail—its entrances and exits are cryptic if not camouflaged. You might call them filters. Regardless of when I ride this lonely trail, be it Tuesday at dewy dawn or Saturday at high noon, I never encounter other riders. While not necessarily a secret, this gem simply eludes most folks’ detection.

In a world gone mad, some of us need peaceful places to ride our bikes. Far from the trendy trailheads, this is where we go in search of singletrack therapy—to tend the dirt, to lop and clear downed trees, to hide a Pulaski in the limestone outcrop so we can fine-tune the drainage on that chossy corner.

I’ve begun calling this close-to-home escape my Mantra Loop. A gauntlet of sporty moves, connected by flowy singletrack, it’s a place to escape the mayhem, a sanctuary in which to draw a restorative cleansing breath and reboot my increasingly jaded outlook. It’s where I take friends who’ve ridden here for 20-plus years, just to watch their excitement on something fresh and obscure...

It’s home to the famed Yellowstone Club, which includes among its members Jessica Biel, Justin Timberlake and Bill Gates, and vacation housing dots the surrounding mountains. Big Sky Resort, the third-largest ski hill in the United States, dominates the tiny base-area town of the same name. While it may not be Aspen, Gallatin County sees its share of the rich and famous.

But if you look at the core of Big Sky, you won’t find Hollywood glamour. Since the ski resort started spinning its lifts in 1973, the soul of the area has been that of a fervent ski bum, waiting in the lift line for first chair. And in the 15 years since the resort opened to mountain bikes, that soul has come to include a whole culture of hardcore riders.

My first taste of Big Sky came in 2009, while working on the inaugural issue of Freehub. The 11,160-foot summit of Lone Mountain dominated the horizon immediately after our car popped out of Gallatin Canyon, the only thing bigger being the Montana sky. While the ski resort has been around for decades, the actual town of Big Sky didn’t come into being until 2001, and lift-accessed trails came shortly after. The resort quickly earned a stellar reputation, which was the reason for our journey. Within the first 15 minutes after walking out of the rental shop and loading the lift, it was obvious that reputation was well-deserved...

If I’m being honest, I never saw myself as a “mountain biker.”

Long, exhausting workouts were never something I particularly looked forward to. I would take a climate-controlled Netflix binge over a sweaty, dirty workout any day.

Then I moved to Helena, MT, and all that changed. I had recently swapped an 8-to-5 corporate job for full-time freelance photography, and ended up being invited to shoot some local enduro races. And that’s when the transition happened: These people were some of the kindest in town, and if I wanted to shoot or hang out with them, I had to be there. And “being there” required being on a bike.

Those first few months were filled with “this-sucks-I-want-to-die” moments, but the thought of what was ahead kept me going—the next summit and the downhill that followed, the flowy singletrack into tacky berms. I wanted it. I craved it. I was hooked...

“In Montana, there’s three things we’re never late for: church, work and fishing.” — Norman Maclean, A River Runs Through It, 1976.

When I moved to Missoula, MT, a mountain town on island time, 25 years ago, these words resonated across the valley. The headwater trout streams drew fly fishermen from around the world to the nooks and crannies of western Montana. Fishing here was legendary and the people I knew spent summers on the rivers. Riding partners were harder to come by.

Mountain biking was a new phenomenon, and the few of us who rode were content with powdery motorcycle trails and the faint paths of local deer and elk. Blue Mountain was the only reliable place to ride, an area nested on the western edge of town with a web of motorcycle trails crisscrossing the hillsides. Its history as a target range for Army artillery laid the groundwork for a relaxed approach to land management, and trails like Deadman’s Ridge—a rutted, chundery, fall-line trail dropping from a USFS lookout 3,000 feet to the banks of the Bitterroot River—kept things interesting...

The flavor of riding around Whitefish, MT can be likened to a well-balanced, three-course meal.

There are short loops to satiate those initial hunger cravings, hearty all-day epics as the entrée, and lift-served flow trails to end the feast with a slight sugar rush.

A decade ago, it was a very different meat-and-potatoes style of riding. All the ingredients were present, but there were no chefs to envision and create the full buffet. Since then, the community has rallied to develop and maintain a growing menu of trails that is delicious, exhilarating and fully satisfying.

To whet the palate, the Whitefish Trail is the perfect way to prepare for local riding in the Flathead Valley. When I first rolled into town 10 years ago, only a few sections of the trail, linked by logging roads on lumber company property, were within pedaling distance from town. There was always the threat of one of those trails disappearing during a logging operation. Now, thanks to a group of dedicated locals, the nonprofit Whitefish Legacy Partners and generous land owners, that once-truncated assortment of singletrack has been linked into a 36-mile trail system, all rideable from town, all fast, flowy and as smooth as butter. One section is still missing, and the completed trail will provide the final link between town trails and those of nearby Whitefish Mountain Resort...

Terry Johnson is a timber beast.

Not because he has a trigger-happy finger on a chainsaw, but because of his tenacity and efficiency while stewarding a big, wild slice of America’s public pie. It’s a title earned by 50 years spent in the mountains of southwest Montana, doing timber surveys, managing forest resources, solving user conflicts and—above all—building trails. And while he’s not a biker himself, those masterpieces of dirt and stone have achieved near cult-like status among Montana’s riding community. But that’s just one chapter of the 78-year-old Johnson’s long story.

Having grown up in Lacrosse, WI, just a short distance from the Mississippi River, Johnson was a water junkie from an early age. The islands and bayous provided an outlet for teenage angst and an escape from daily life; it also provided a training ground for the future woodsman. The banks of the Mississippi near Lacrosse rise 600 feet above the waters—barely a foothill for Montana, but the coulees were filled with trails, caves and forests. For the young Midwesterner, it seemed a near wilderness.

Those backwoods made an impression on Johnson, and after high school he spent the late 1950s earning a degree in Forest Resource Management at the University of Minnesota. The major was known to channel graduates immediately into Forest Service careers. Johnson was fine with that...

When I go to the Aptos Post Office to mail something nowadays, I look across the street at a Los Angeles-inspired condo development and a nondescript...

When Tom Stuessy took the job as executive director of the Vermont Mountain Bike Association (VMBA), the organization’s bank account had only $...

People often say, “Third time’s a charm.” However, World Cup mountain bike racing at Mont-Sainte-Anne (MSA) has been charmed since...

END_OF_DOCUMENT_TOKEN_TO_BE_REPLACED

SR Suntour is no stranger to the suspension game, and with the recent introduction of their new all mountain fork, the "Auron," they’ve put those...

There is rain, and then there is the Pacific Northwest. In fact it rains so much here that we don’t even use umbrellas—perhaps with a bit...